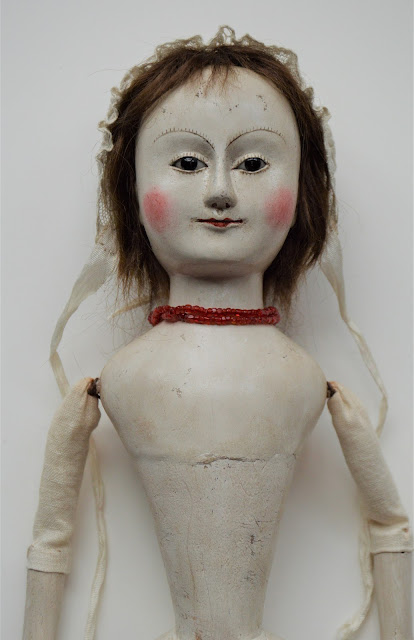 I am pleased to introduce you this lovely wooden doll inspired by an English fashionable doll from the late 17th century.  She is dressed head-to-toe in historical clothing!  There are just a few survivors of these types of dolls, particularly this one, which would have been carved by an exceptional craftsman of that era.  And here pops two big questions: Where these Pandora dolls were made and what was their function, why were they dressed in such luxurious garments, and showing the latest trends in fashion ?

Just if you missed the Salon, these were two of the interesting subjects we talked about in the Salon Series: "Queens of Fashion", hosted by the Bata Shoe Museum in Toronto, Canada.

To answer the first question, for most of these dolls there is not an exact place where they were made, but there are historical researches and published articles about the origin of the first fashion dolls, they were made in France, specifically in Paris, as many fashion historians call it  " the cradle of the fashion industry of the 18th century"

About the second question, these little dolls that travelled miles and miles across Europe, had one purpose: Advertise the new creations of all the fashion makers,  not only of the dressmakers, but cloth merchants, jewelers, shoemakers, wigmakers, you name it!

I think it was the most ingenious and lucrative idea of the French makers, not only boost their sales locally, their business had such a demand all across Europe that made them the Emporium of the 18th century fashion, inevitable to elude by the French and British courts and anyone related to the aristocracy!

This reproduction is my interpretation of a wooden Pandora doll from the late 17th century, one of my favorite dolls to reproduce!

She is 16 inches tall. I made her clothing and accessories with early materials and textiles, some of them dating back to the mid 19Th century.

As always, I have posted several photos for you to see step-by-step how I have dressed her and all the details of this doll.  Enjoy! 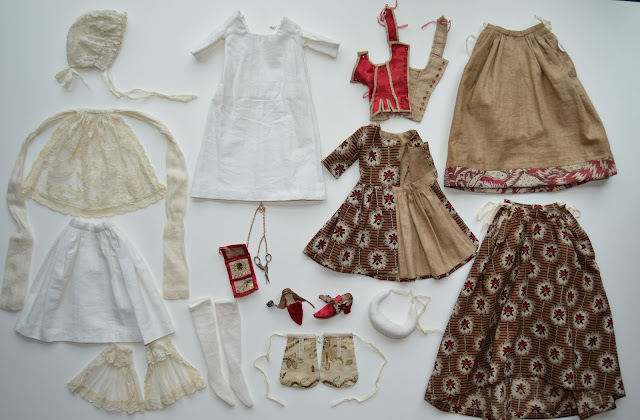 Here is a photo of her clothing and accessories that I custom made for her. 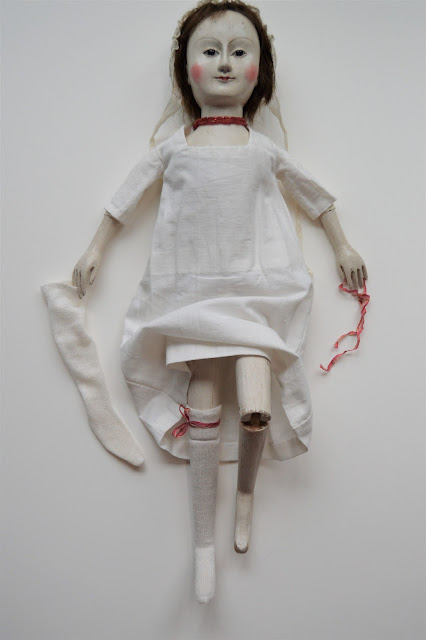 The shift or chemise plays an essential role because not only does it protect her clothing from the body moisture, but also will protect her from the roughness of some fabrics.

Silk ribbons are tied tightly around her legs, just above the knees, to hold up her cotton stockings. 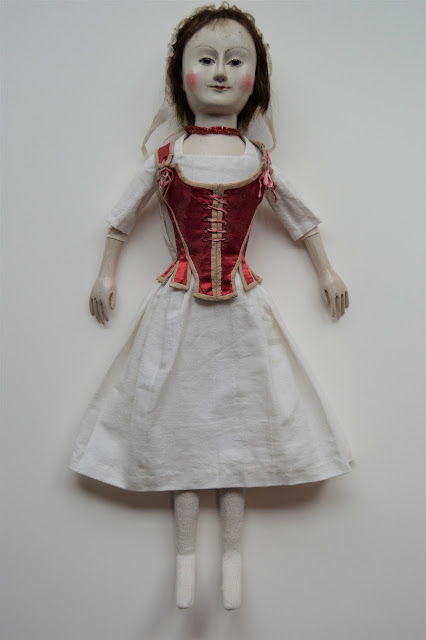 The dickey petticoat is the second layer of skirt, worn for warmth and modesty.

Her stays are made of a late 19th century silk brocade in a lovely cranberry red color. 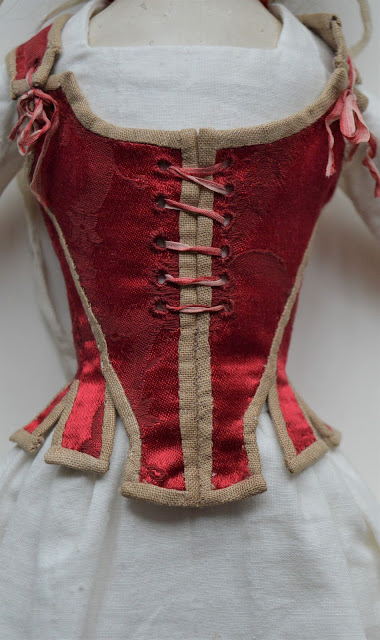 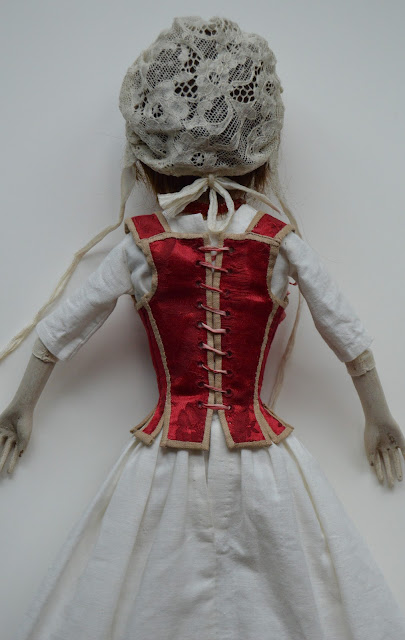 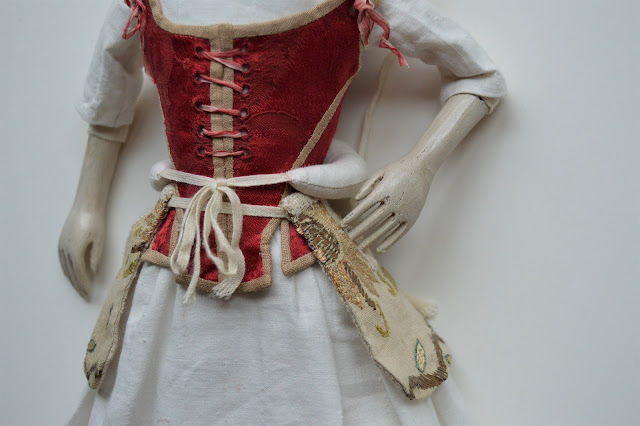 Cloth pockets: early Ottoman embroidery with silk and metallic threads.
The bum-roll(revival style), which was an indispensable woman's undergarment during the Tudor period, will make the hips look wider. 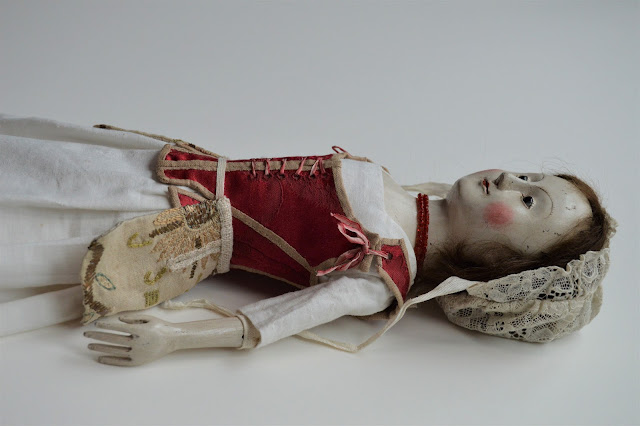 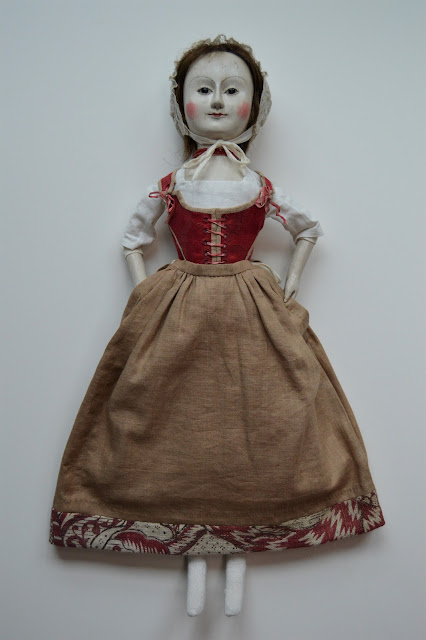 She is also wearing another layer of petticoat or underskirt made of cotton, it has pocket- slits  as well, so she can reach to her secret pockets! 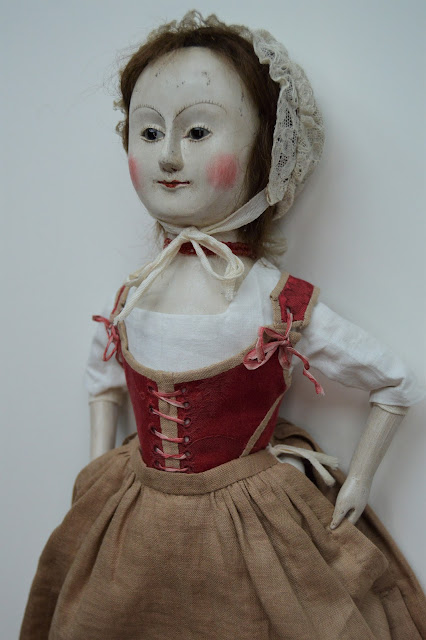 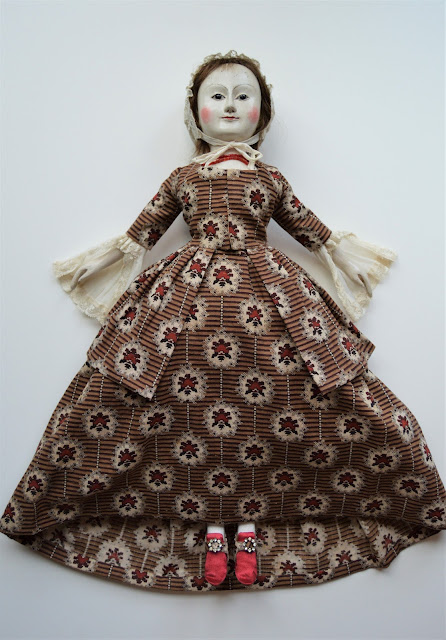 The caraco jacket is worn over a skirt, made of a beautiful printed cotton fabric from the Victorian Era. Lace frills are tacked to the end of the sleeves and they are detachable. 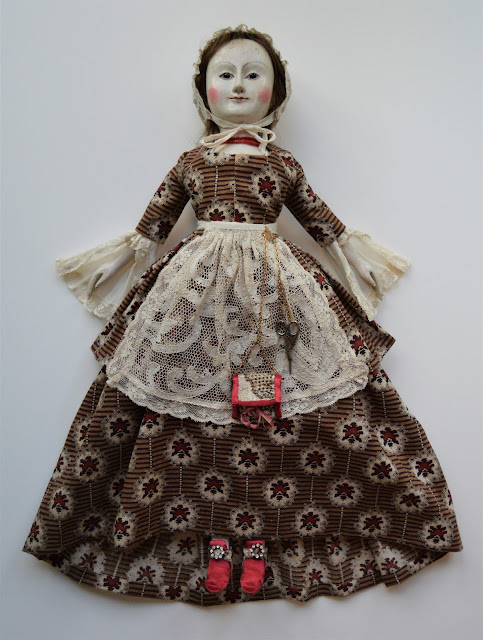 Her chatelaine is holding essential tools for her sewing chores. A miniature antique scissors and a folding sewing case hang from two gold filled chains on the chatelaine. 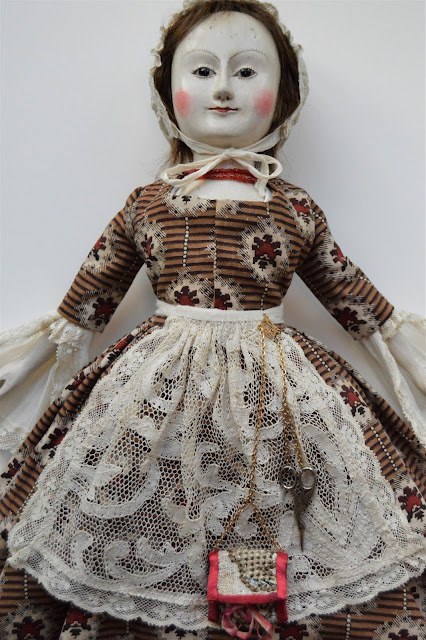 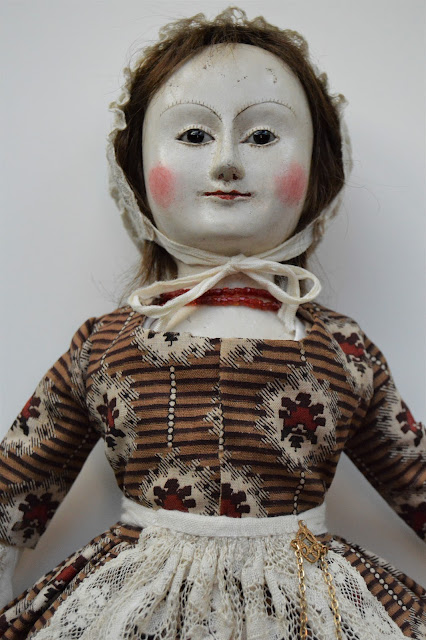 Her necklace is made from red glass seed beads dating back to the Victorian Era. 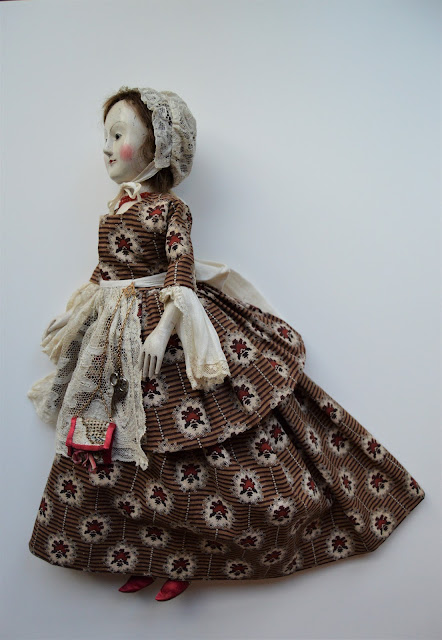 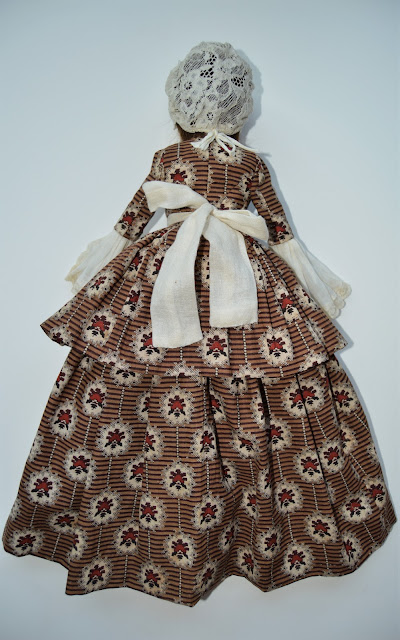 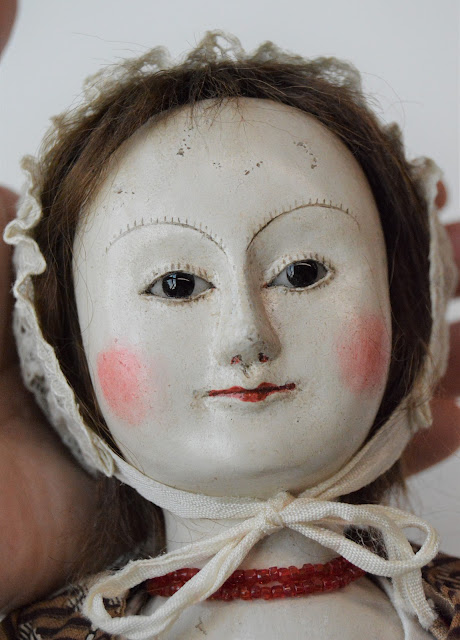 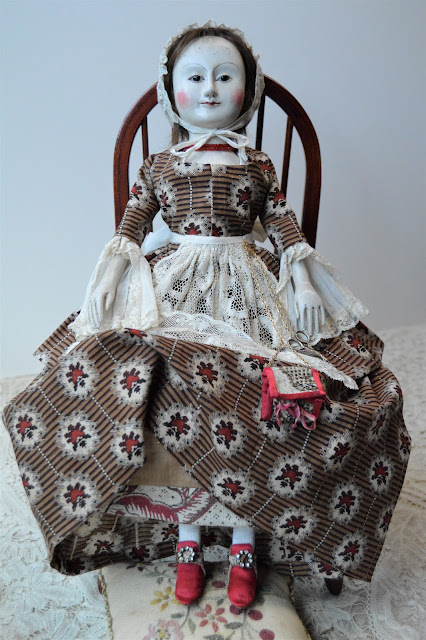 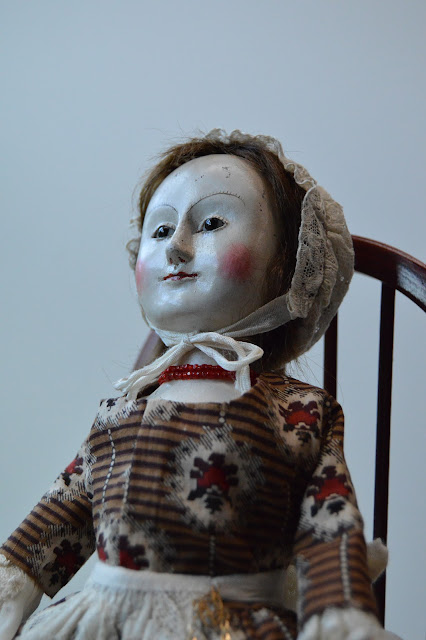 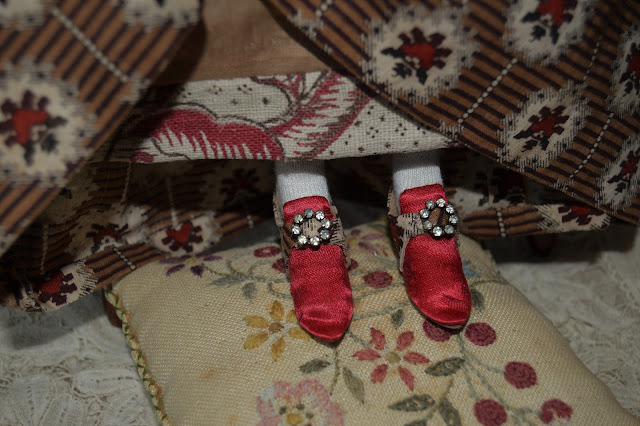 And last but not least are her high-heel shoes, they are inspired  on a original pair of shoes made in Britain probably dating back to the 1750's. Her shoes are made of the same brocade fabric as the stays and they are adorned with a pair of antique miniature paste shoe buckles.
Delightful!
Posted by NewEnglandDolls at 10:17 PM 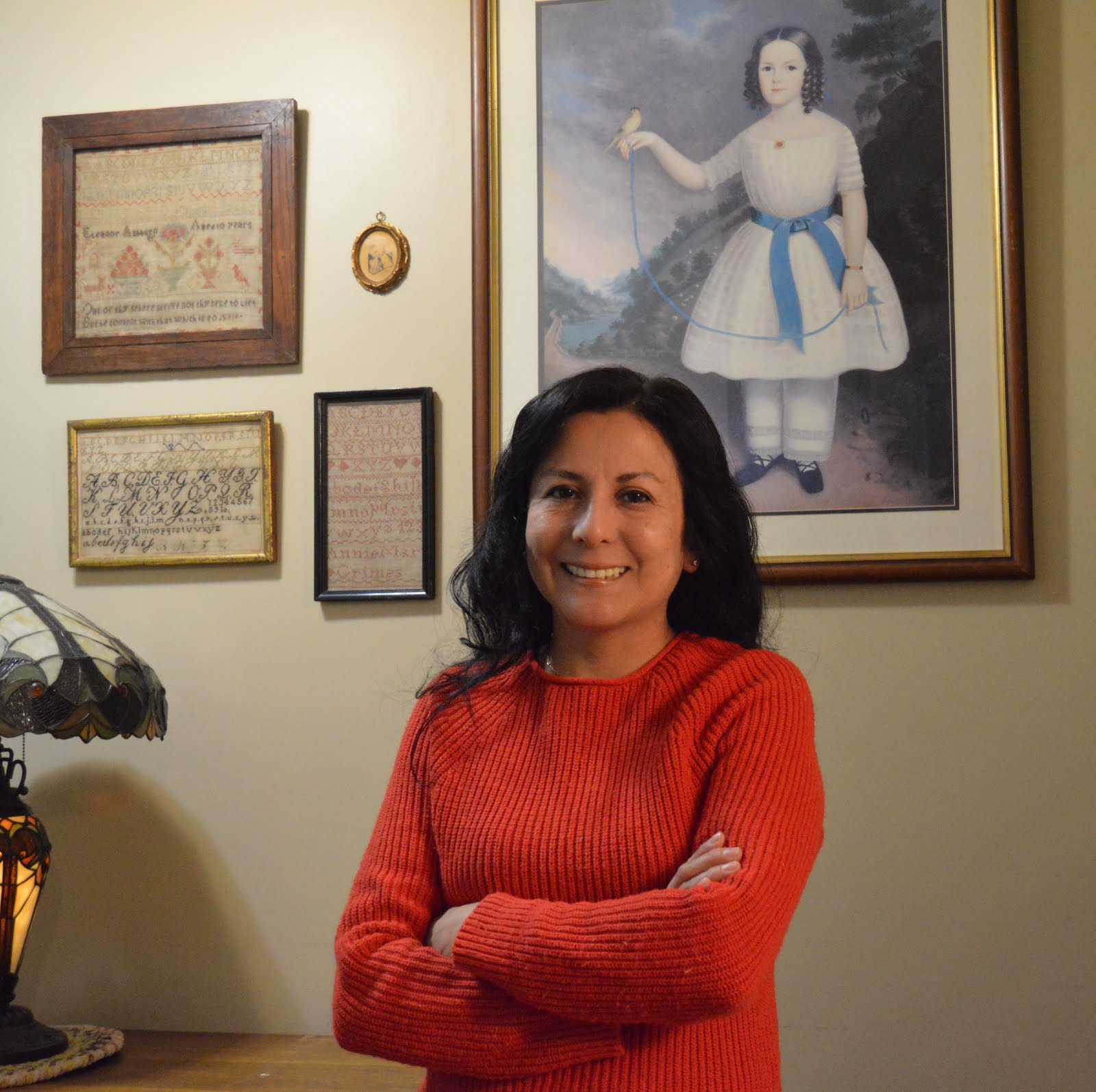 Hello and welcome to my blog!
My name is Sonia Krause. I live in New England with my wonderful family. I am an avid collector of early textiles and it's no secret that I have a huge love for dolls.
The aim of each of my projects is to make a doll dressed in period costume to ressemble, learn and admire the history behind each of them.
My blog "Art Dolls Historically Inspired" was named after this concept.


I AM A DOLL-MAKER
I make two type of dolls: wooden (so-called Queen Anne Dolls that were made by the amazing craftsmen throughout the 17th - 19th centuries) and cloth dolls (the craftmanship and artistry of Izannah Walker amaze me every time I see one of her dolls)


HOW TO IDENTIFY A KRAUSE DOLL
All my dolls are signed and dated on the back.
One of the distinctive features of my black dolls is that they have painted dotted eyebrows. My wooden doll "Griselda" was my first black doll featuring lovely raised-painted-dotted eyebrows. My boy dolls have soft and slightly archered-painted feathered eyebrows, except for the portrait dolls that have painted more realistic facial features.


LOVE FOR TEXTILES
You probably noticed that most of my dolls are dressed with beautiful, rare examples of early textiles, some of them dating back to the 17th and 18th Centuries. I am always excited to actually be able to re-use them for my doll's clothing. It is a great feeling to bring to life these amazing textiles and make them shine again.
I absolutely love the idea that my dolls can be able to be handed down for generations to come. 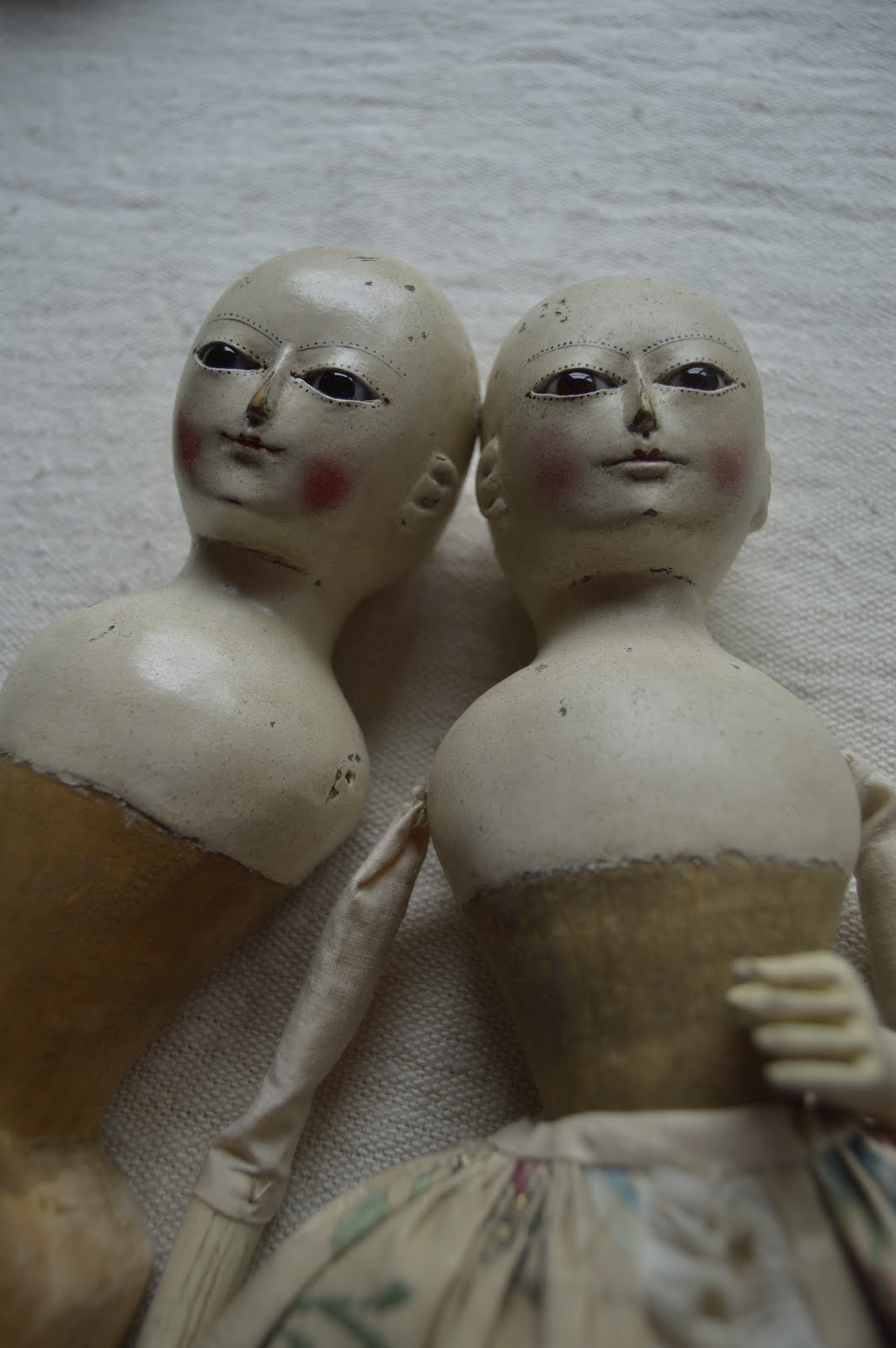